If you’ve recently been asking yourself what’s going on with mortgage rates, you’re not alone. As we start moving towards economic recovery and investors’ optimism of vaccine availability to combat the coronavirus,  fixed rates have started to edge upwards.

Government policies, in general, are designed to protect the economy, thus one of the reasons that during this pandemic Canada had exceptionally low mortgage rates over the past several months. However, the interest rate environment has rapidly been changing since February 2021, which is a very different narrative than what most people would expect given the constant barrage of negative information one hears on the radio, or sees on the news lately.  So why is this happening? Well, first of all, let’s be clear that not all interest rates are rising. Fixed rates are, variable rates are not. The prime rate, which variable rates are based on, has not increased. So why are we now seeing an increase only to fixed rates? It’s simple, the yield for Government 5-year bonds went up, and this number plus a spread, serves as the basis for many 5-year fixed mortgage pricing so naturally, it causes fixed mortgage rates to follow suit. Ok, so maybe not so simple. Let’s try this again.

Banks and mortgage lenders predominantly use Government of Canada bonds to raise money for fixed-rate mortgages. In the bond market, interest rates can fluctuate more often since they’re subject to the changing moods of traders and bond investors as they try to figure out how fast the economy will grow and where inflation is headed. When Albertans borrow money from a bank or mortgage lender, those funds are borrowed in the form a mortgage, while the lender is borrowing the money in the form of a bond.  The bond yield is the price at which the lender needs to pay for the money they are about to lend which ends up in the form of a mortgage. The spread is the difference between what the bank pays to get the money and the interest rate they lend the money to someone needing a mortgage.

For example, if the yield for a 5-year bond is 1 percent and the rate the mortgage company lends the money to you at is 2 percent, that would mean a spread of exactly 1 percent. The range in which lenders have typically like to earn at least 125 to 150 basis points (1.25 percentage points to 1.50 percentage points) for a spread above the bond yield.

Here are some actual numbers now to consider: 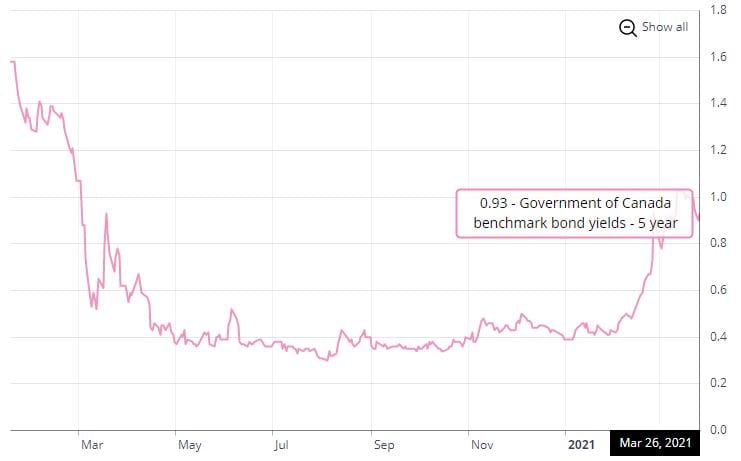 If you look at where bonds have settled in March 2021, they have been steadily between .80 -1 percent and precisely why we are now seeing mortgage rates in the low 2 percent range. As it stands now, those who want to buy a new home or refinance their existing mortgage are still getting what is considered to record low-interest rates, especially considering rates over the past decade have traditionally hovered between 2.5 percent – 3 percent for 5-year fixed terms.  We’ve seen the odd occasion of rates go over 3 percent and we’ve seen the odd time where they have been under 2.50 percent which means we’re still in an extremely low-interest-rate environment. 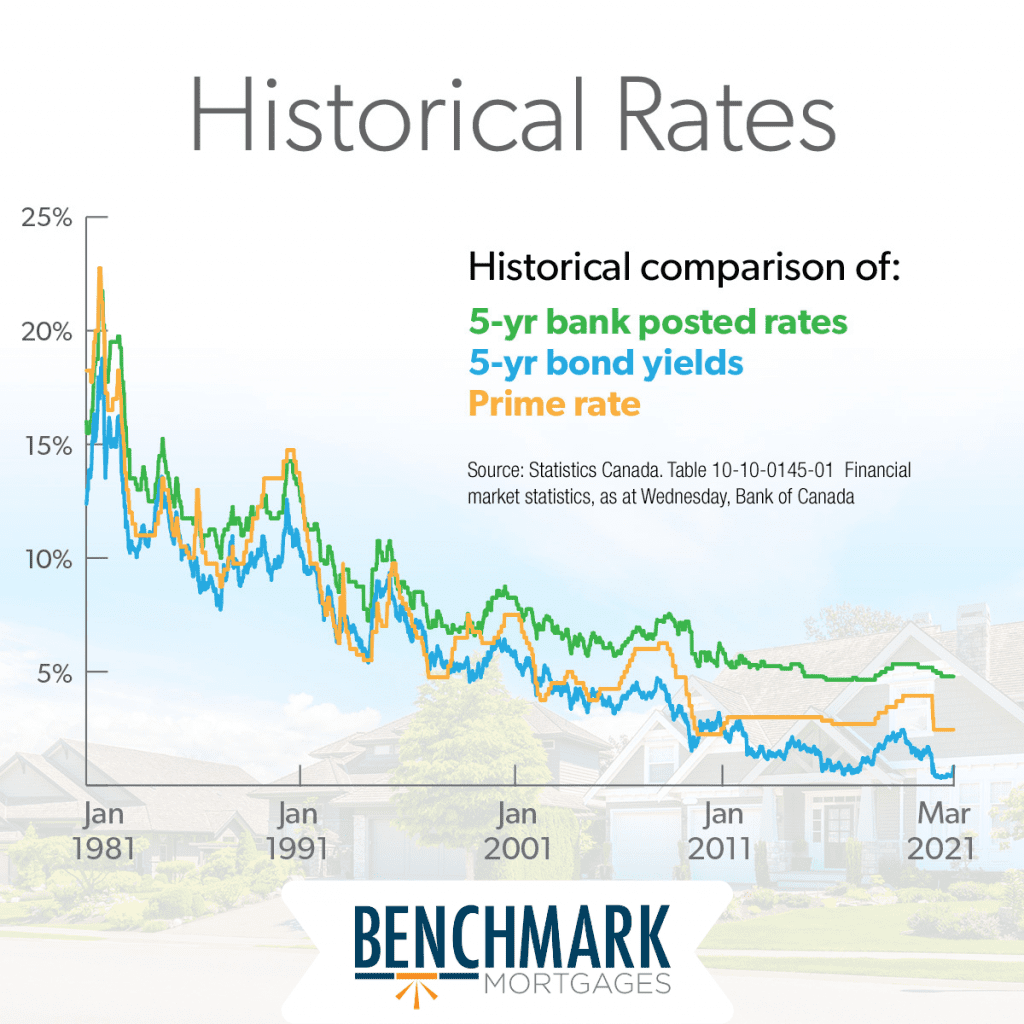 What does this mean for you?

No matter what situation you find yourself in today, you can count on Benchmark Mortgages. If you’re looking for a second opinion or looking to purchase a new home in the coming months, give us a call.  We’re based right here in Edmonton, Alberta, and have helped numerous clients successfully determine the right mortgage for their today and their tomorrow.

Need Help Exploring Options For Your Home? Contact us Today!