In the wee hours of September 16, 2019 a number of financial institutions and other big corporations were looking to borrow money for between one and 14 days. Nothing unusual about it. It’s the overnight lending market called the repurchase or “repo” market”. Companies would hand over security – get the money from the lending financial institution and promise to buy back the security at a slightly higher price the next day. The slightly higher price represents the interest.

It’s straightforward and a prominent part of the financial system. Except on September 16th virtually no one wanted to lend the money because they were unsure the borrower would pay it back by buying back the security the next day. A similar crisis had taken place during the subprime credit debacle in 2008. Major companies like AIG, Washington Mutual, Lehman Brothers were awash with non performing loans and securities – so nobody wanted to lend to them. Last September, the big concern was Germany largest bank, Deutsche Bank, because it has a massive derivative and futures market problem – in the neighbourhood of $45 billion dollars in potential liabilities. Lenders were worried that the borrowing company may have exposure to Deutsche Bank’s problems, which could blow up any minute.

Compounding the liquidity problem was Europe’s $12 trillion in negative yield bonds. No one wanted to buy them and be guaranteed less money when they matured, so instead, they put the money in safety deposit boxes or sent it out of the country. In other words, the system was short of cash and confidence.

At the risk of oversimplifying, on the night of September 16th, the annualized rate for borrowing was 2% but suddenly there were no lenders. So the rate went up to 4% then 5% – still no institution was willing to lend even at those rates. Ultimately, the rate went all the way to 10%.

Think about that. The borrowing rate went up 500% in a matter of hours. The Federal Reserve was forced to step in to provide the funds to borrow in order to bring borrowing rates back down and prevent a major credit crisis. And they have literally put in billions every day since. This is the essence of liquidity crisis that continues to this day. 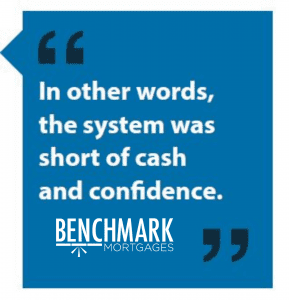 Stocks always fall because there are more sellers than buyers but the lack of credit and cash in the system exacerbated the problem, which caused the massive downside moves. In short, we’ve witnessed the unravelling of the credit bubble that pushed prices to record highs in the stock market. The lack of liquidity forced both the New York and Toronto Stock Exchanges to shut down several times in the last five weeks because even big-name stocks went “no bid.” So they closed the exchanges for 15 minutes to make time for buyers to come to the table in order to produce an orderly decline. The same thing happened in the fixed income market. There were far more sellers than buyers of corporate bonds and quality preferred shares. In many instances, there were no buyers. It’s not difficult to understand why with a question. Would you like to lend money to Air Canada, Carnival Cruise Lines, a restaurant chain, a retail outlet whose now been forced to close their doors, (which is what you’re doing when you buy a bond.) I doubt it. But how about lending the government of Canada money for five years and receive ¾% annually. Probably not.

Without lenders willing to buy bonds or other credit instruments things grind to a halt and that’s the biggest fear of central banks. Can you imagine what would happen to the real estate market if no institution was interested in approving mortgages? Sales would stop and that’s what the central banks are trying to avoid.

That’s why the Bank of Canada has pledged to spend $5 billion minimum every week to buy bonds or asset-backed securities from financial institutions. That way the financial institution gets money with which to lend with. When you hear the term Quantitative Easing that’s what they’re talking about. Short term lending of between one and 90 days has also come to a halt because lenders don’t want to take the risk given all the uncertainty so now central banks are providing the money for the system to continue to operate. In the US the Federal Reserve has promised unlimited amounts of money in order to keep both short and long term markets functioning. 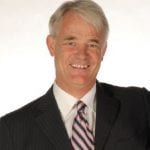 One of Canada`s most respected business analysts, Michael is best known as the host of Canada’s top rated syndicated business radio show MoneyTalks, and Senior Business Analyst for BCTV News on Global.